Orthoceras, also known as Orthoceratites, is a genus of extinct nautiloid cephalopod. Its name is derived from the words “straight horn”, referring to it’s long, conical shell. These creatures roamed the seas during the Ordovician Period (485 million - 443 million years ago). They are the ancient ancestors of ammonites and squid that can be found in sizes ranging from a centimeter to over 14 feet long. Orthoceras are commonly found on a rock matrix,most of the time being limestone. A majority of specimens on the market have been coming out of Morocco, Scandinavia, Sweden, and the Baltic states.

It’s not uncommon to find Orthoceras used as a carving or sculpting material due to the fossil’s hardness. Orthoceras can be carved into plates, spheres, palmstones, jewelry, lock boxes and other little trinkets.The fossil with the marine rock it’s attached to is so durable that its often used to create furniture. We have personally seen end tables, chairs, table tops, and even fountains! 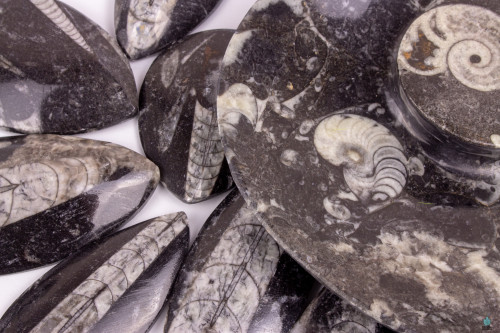 When it comes to the energy in which this fossil possess, it's all about the ancient knowledge this sea creature holds. Having roamed the seas over 400 million years ago, this creature was living in a world that looked much different than it does today. By meditating with the fossil’s energy, one may feel a connection to that ancient Earth and all the knowledge that it contains. This stone will offer up an abundance of life force energy which can be used in areas where we need it most. Some ancient tales even suggest that wearing Orthoceras daily can increase your lifespan.

Orthoceras will activate our root chakra by grounding us down to earth with ancient energy. This fossil pushes us on a path of transformation, from who we were, to who were are and to who we want to be. We can use the information gathered by visualizing these past lives and then apply it to who we are today. History is constantly repeating itself and only by learning from our mistakes can we move forward and grow on the path of altruism. Getting connected to this ancient creature may be a bit challenging, but the reward is well worth it.